India has a number of engineers and scientists who have the potential to steer the industry ahead and to take it to its potential. Currently, about 80 percent of the antiretroviral drugs used across the globe to combat AIDS are supplied by pharmaceutical firms in India. The sector is valued at US $33 billion and it is expected to expand at a CAGR of 22.4 percent in the next two years to reach US $55 billion. The exports made by the country stood at US $17.27 in 2017-18 and it is expected that the same will exceed $19 billion. 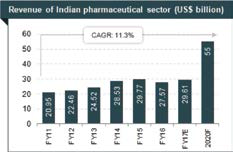 Only in 2017, the sector has received 304 new drug application approvals from the US Food and Drug Administration. India accounts for about 30 percent by volume and 10 percent by value in the US generic market. The biotechnology industry in the country is expected to grow at an average growth rate of 30 percent in a year and will reach US $100 billion by the end of 2025. The pharmaceutical sector in the country attracted cumulative FDI inflows worth US $15.83 between 2000 to June 2018. The market has grown by 8.7 percent year on year and witnessed 46 mergers and acquisition deals worth US $1.47 billion. India will also enjoy a higher volume of exports to the US because the branded drugs worth US $55 billion will become off patent in the coming two years.

The medical device industry in the country is valued at USD 5.2 billion and contributes about 4-5% to USD 96.7 billion which is the total current value of the Indian healthcare industry. The industry has steadily grown from USD 2.01 billion in 2009 and is expected to reach to USD 50 billion by 2025. With regard to the medical devices, India is the fourth largest in Asia after Japan, China and South Korea. India’s medical device market is dependent on imports and the imports meet about 80% of the total demand for medical devices. The devices are crucial, risk oriented and innovative in nature which is the demand of the country today. The increase in population of the country and the complexities in diseases will only lead to more demand of innovative medical devices in the future. The recognition of this sector has encouraged substantial interest of the government and major sector players in the business segment.

Government initiatives
The Government has taken many initiatives to promote the pharmaceutical sector in the country. These are elaborated below:
Challenges
The sector faces a number of challenges that need to be dealt with. The biggest challenge is the high out of pocket expenditure which limits the access to medicines. Another challenge is the pricing of patented drugs. In order to improve the access to medicine to the common man, the Government needs to have a robust procurement plan for the products at an affordable rate for the supply through government hospitals and dispensaries.

Another major challenge is the growing penetration of the spurious medicines in the market. There are fake versions of high value brands of pharmaceutical companies that adversely affect their business performance and pose a major challenge and are a huge health hazard. Further, the demand for the services in pharmaceutical sector has outstripped the supply and there is a shortfall in the manpower of the country at every level. The government and public have been pressuring to make drug prices more affordable and the companies need to reduce the prices for essential medicines in the country. Lastly, there are inadequate health insurance schemes in the country as compared to other countries like Sri Lanka, Brazil and South Africa. The insurance coverage in the county is low and the current schemes only cover the hospitalization expenses. A Safety Working Day With LANXESS WASHINGTON, Sept. 10, 2020 — The Publications Division of the American Chemical Society (ACS) is proud to announce a new policy that will allow authors to update the name used on their prior ACS publications. Beginning in October, authors who have changed their name for any reason, including (but not limited to) gender transition, marriage, divorce or religious conversion, will be able to request that articles published under a previously used name are updated to reflect their new name. Read More

Reinach, Switzerland, 10 September 2020 - Archroma, a global leader in color and specialty chemicals towards sustainable solutions, today announced that the 4,320 color references of its Color Atlas library have been selected by Shima Seiki and integrated into their ‘SDS-ONE APEX’ series of software for the design, planning and virtual sampling of textile and apparel. Read More RONSE, BELGIUM – Devan today announces new test results confirming the high performance virus-reducing capabilities of its BI-OME fabric coating technology on both unwashed and intensely washed fabrics. According to independent testing, BI-OME is proven to achieve 99% and higher virus reduction, including of SARS-COV-2, on samples before washing and retains 98.5% even after 25 wash cycles. “In view of the COVID-19 pandemic and fast-approaching autumn/winter flu season, we were keen to provide Read More

Charlotte, September 9, 2020 – Clariant, one of the leading suppliers of sustainable ingredients and solutions for the Industrial Lubricants Segment has launched a new and innovative phosphate ester offering outstanding performance and superior sustainability in metal working fluid formulations. Read More

Why Lime Juice Burns Your Skin in the Sun VIDEO

WASHINGTON, September 4, 2020 — Did you know that making margaritas and then heading to the beach could leave you with a painful, swelling burn? In this episode of Reactions, we chat with chemist Tien Nguyen, Ph.D. –– who experienced just that –– and learn why lime juice plus the sun is a really bad combination: Read More

Cologne – Specialty chemicals company LANXESS is selling its organic leather chemicals business to TFL Ledertechnik GmbH. TFL is a global supplier of leather chemicals and a portfolio company of US investment company Black Diamond Capital Management, L.L.C. Both companies signed an agreement to this effect on August 12, 2020. The purchase price comprises a fixed component of EUR 80 million and a performance-related component of up to EUR 115 million. In addition, TFL will assume certain liabilit Read More