The world's first cistern to use condensate from air conditioning units to flush the toilet has been launched and would save 1.5 billion litres of water a year for the 487 European hotels currently being built.

Encore (Environmental Condensate Recovery) is the most environmentally friendly cistern as it uses a free, sustainable water supply that has previously been drained to waste.

Encore Director David Davis with Encore cisterns that would save hotels so much water they would fill numerous Olympic swimming pools. 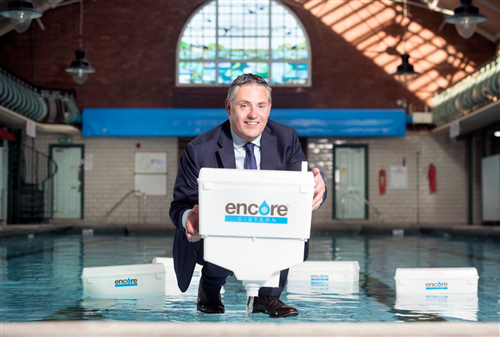 Encore is also suitable for villas, apartments, offices and anywhere with toilets and air conditioning.

In another first for cisterns, Encore allows architects, consultants and specifiers to secure two extra LEED points and BREEAM credits - the gauge for building sustainability.

Air conditioning units have a pipe that drains all the condensate away.

"We've developed the only cistern that uses this free water to flush the toilet.

"When you consider how many buildings use air conditioning globally, billions of litres of condensate water is generated all of which has been wasted - until now.

"All buildings need toilets so why wouldn't you use a cistern that recycles a free, sustainable water source especially when there is a global water shortage crisis?"

Data from hotel specialist STR Global shows 77,360 rooms in 487 hotels are currently being built in Europe. Compared to traditional cisterns, using Encore would save the average 158-bed European hotel 3.08m litres based on standard 80% occupancy levels. In total, Encore would save them 1.5bn litres of water a year, filling the equivalent of 600 Olympic swimming pools.

Encore holds 18-litres of water - three times more than a conventional cistern but its dual-chamber design means it fits like standard models. The bottom chamber holds 6-litres, which comes from the mains pipe. The upper 12-liter chamber is filled with air conditioning condensate. When the toilet is flushed, the lower chamber empties then refills with condensate from the upper chamber. If there are multiple flushes close together or the air conditioning is not in use, the cistern is filled by the mains fed pipe. If the toilet is not used for a period, surplus condensate is fed away.

Encore was invented by David Davis and Graham Kelly, directors of the UK-based G&H Group, a £25 million Building Services company.

"For decades we've designed and installed schemes and watched the stream of water produced by air conditioning units literally go down the drain but not via the toilet," adds Mr Davis.

"Responsible businesses striving to construct the greenest buildings know how hard to get LEED and BREEAM points are.

"Gaining two for choosing an Encore cistern is simple and a great advantage."