The growth and future of vertical farming industry

Vertical farming is a form of growing plants and produce in a vertical orientation. It maximizes the use of the location footage and is a preferred method for roof top and other urban forms of agriculture. It is one of the common methods of growing produce in an indoor environment. The vertical farming market size is expected to cross USD 13 billion by the end of 2024. It is also providing impetus for growth in the indoor farming sector due to the use of LED lights and different growth mechanisms. The main reason behind the increase in the growth of vertical farming is the low labor costs, easy accessibility to fresh produce, zero pesticides usage and the location of vertical farms closer to the consumer base.

Several companies have sprung up in the last decade, filling old warehouses and idle factories with structures that grow vegetables and herbs in the artificially lit quarters, away from the glow of the sun. Companies choose this since it uses less water and grows crops faster than the outdoor farms. It also yields more crops per square meter than the traditional method of farming. It can be used throughout the year, without having to wait for certain seasons and the facilities for the same can be built anywhere. 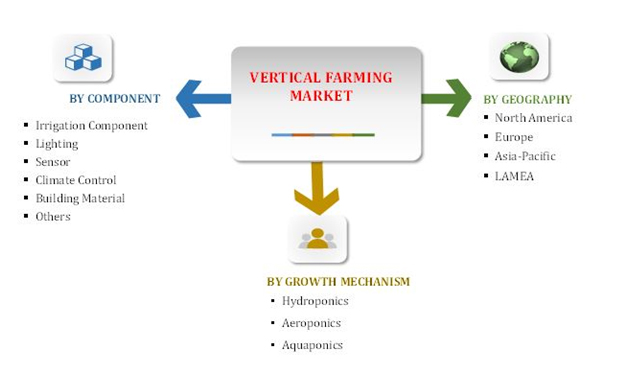 Courtesy: Allied Market Research
Farmers tend to choose between two models for indoor agriculture- hydroponics, in which the plants are grown in a nutrient rich basin of water and aeroponics, in which the crops’ roots are sprayed with a mist containing water and nutrients. It uses less water but comes with technical challenges. The biggest benefit of vertical farming is the use of less water as compared to traditional farming in fields. One of the biggest names in vertical farming is Aerofarms in New Jersey which is the world’s largest indoor vertical farm with a total floor space of 7000 sq mt. Consumers across the United States are choosing to grow and pick the plants themselves which ensures that the vitamins and nutrients are intact. The consumers grow their herbs in a window box which is low cost and low maintenance. Apart from Aerofarms, various companies like Sky Greens, FarmedHere, Illumitex, Inc., Everlight Electronics, Koninklijke Philips N.V.  are a part of the vertical farming chain. 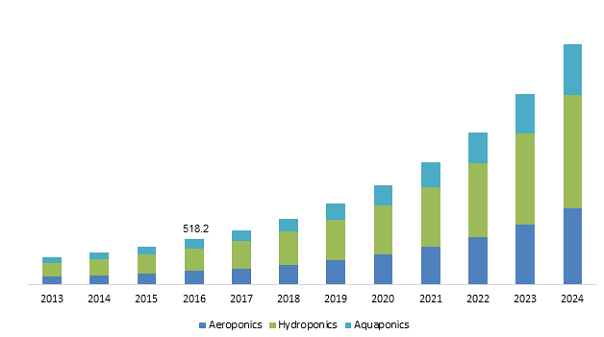 Courtesy: SNJ Today
The factors driving the growth of vertical farming include the high quality of food with no use of pesticides. It is expected that the lighting devices, which are used as hardware will lead the vertical farming market. The traditional lighting system will be replaced by LED system which produces dual band color spectrum at the same time which generates low heat and is highly efficient. The hydroponics growth mechanism is expected to grow at the highest CAGR between 2016 and 2022. This is attributed to the less complexity in the method and the method reduces the burning of fossil fuels thereby reducing the emission of gases, which are harmful to the environment.

This concept does have major drawbacks as well. It is capital intensive to start a vertical farm, the energy costs are high and the space is limited. Further, due to the lack of soil, the produce does not get an organic label. Nevertheless, new technology is driving down the costs as consumers are increasingly seeking all natural foods. LED lights form the major part of expenditure while scalability is a vital factor to a vertical farm, which has been the biggest challenge for the industry. Vertical farming should produce enough crops to sell at a profit.

This is an area which has a massive long term potential for growth. The environmental changes have had an impact on the world and this is a strong move towards a sustainable agriculture model. This is the next big thing for investors. Investors from across the world are considering it is the best investment for the times to come. The lightening devices companies across the globe are investing in vertical farming with the production of LED lights. Bowery Farming recently raised $20 million for vertical farming from investors which include General Catalyst, GV and GGV Capital. The company relies on LED lights, computer software and robotics to grow plants without pesticides and with less water. Whole Foods has invested in a Chicago area for vertical farming. Keeping the various challenges in mind, it can be said that the vertical farming industry is here to stay. With the use of the latest technology it will become possible to source your vegetables from just a few blocks.