The strong impact of automotive industry in India

Auto industry in India is one of the largest in the world. The industry accounts for 7.1% of the GDP of India. The two wheelers segment has an 81% market share and is the leader of the Indian automobile market. It owes it to the growing middle class and a young population which prefers two wheelers as compared to public transportation. India’s automotive industry is one of the most competitive in the world and covers about 97% components required to manufacture a car. Further, the growing interest of the companies in exploring the rural markets has added to the growth of this sector. India is also a major auto exporter and has a strong future. The sales of passenger vehicles, commercial vehicles and two wheelers grew by 9.17%, 3.03% and 8.29% respectively from April 2016 to January 2017.

The Government has taken several initiatives which show the significance of the industry for the Indian economy. Major automobile players in the Indian market are expected to make India a leader in the world by 2020.Maruti Suzuki, the leading auto maker expects the Indian passenger car market to reach to four million units by 2020. It currently stood at 1.97 million units in 2014-15.Global auto manufacturers consider India with a potential to be one of the top five markets outside of Europe.The Indian automotive aftermarket is estimated to grow at about 10-15 per cent to reach US $16.5 billion by 2021 from US $7 billion in 2016. India has the potential to generate up to US $300 billion in annual revenue by 2026 and create 65 million additional jobs which would contribute more than 12% to India’s GDP. 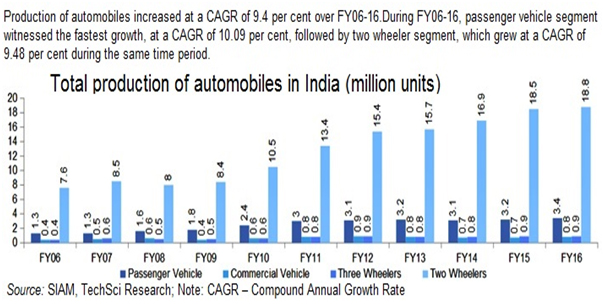 To keep up with the growing demand, various auto makers have invested heavily across various segments of the industry in the last couple of months. The industry has also attracted Foreign Direct Investment worth US $15.79 billion from 2000 to 2016.  Tesla Inc, electric car maker is expected to introduce its products in India during the summer of 2017. Kia Motors Corp, an automobile company in South Korea is close to finalizing a site for its first factory in India and is slated to attract US $1 billion of investment.  They plan to begin operations by the end of 2018. Various automobile manufacturers are exploring possible options of introducing self-driven cars in India.

BMW plans to manufacture a motorcycle of less than 500 CC, the G310R in TVS Motor’s plant in Tamil Nadu to cater to the Indian market. Honda Motorcycle and Scooter India has reached a dealership network of 4,800 across the country and plans to increase it to 5,300 by the end of 2016-17. Hero Motocorp plans to increase its participation in the Indian electric vehicle space through its internal EV program. A self-driven car firm, JustRide has raised US $3 million which will be utilized to elevate the car sharing platform JustConnect and Yabber which is based on the company’s smart vehicle technology.