An Overview of the Global Coatings Industry

There is a rise in demand for coatings with low volatile organic compounds due to the increasing environment concerns. This has led to a positive influence in the demand scenario in the global coatings market. The industry is dominated by water based coatings due to the limited presence of harmful organic solvents. Coatings are also used in the construction sector on account of the increasing number of commercial and residential buildings. Due to increasing urbanization and an increase in the consumer preference for visually appealing residential buildings, the demand for agricultural paints will rise over the period of next five years. Asia Pacific has Global highest share in the global coatings market due to the increasing population which has led to a surge in the development of residential spaces. The growing automotive sector in major economies like India, Japan and China has also led to a rise in the demand of coatings and will continue to do so through 2022. 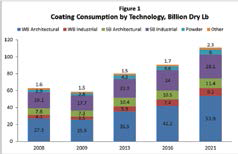 The global coatings industry grew at a rate of 4.2% in terms of volume and 5% in terms of value since 2016. It is expected that the same level of growth will continue in the coming years because of the increase in construction activity across many regions of the world. The growth of the industry is slightly higher than the GDP growth of many economies. Asia comprises almost 45% of the value of the global market. It will lead the overall coatings growth and the price inflation also has an impact on the value growth numbers.

The biggest driver of the coatings growth rate is decorative coatings. It is driven by construction activity across the globe. Every country has seen a significant rise in the construction activity and the growth of coatings sector is higher than the GDP growth. The demand for auto OEM coatings is typically driven by automotive units. OEM coatings grew at 1.7% in terms of volume and 3% in terms of value over the past year. Again, auto refinish is driven by the number of cars that are on the road. All the values have grown at a moderate rate and the demand of auto refinish has remained normal.

Segmentation of the market by geography

When it comes to the geographic division of the market, Asia is the largest region within the global coatings industry and has remained so for many years. It accounts for 52% of the volume and 45% of value in the market. Asia is not only the largest market but is also the fastest growing market. The industry is estimated to have grown by 5.7% in volume and 6.3% in value in the last couple of years. Asia has the largest coatings market and China hold about 56% share of the value of the total Asian coatings market. It is followed by India and Japan. India has eclipsed Japan as the second largest coatings market in Asia, however, both are sized similarly. The second and third largest market is of Europe and North America. Europe accounts for 19% of the volume and 23% of the value of the global market and North America accounts for 13% volume and 18% value of the world market.

Outlook for the coming years
The main drivers of the global market are construction activity, GDP, industrial and automotive production. Global GDP is expected to slightly increase in the coming year and the demand for coatings should continue growth at a fast rate. The construction market is expected to slow globally in the next year. The construction market in China is expected to continue growing at a higher rate but not as high as it did in the past. The overall growth of the market will not be quite strong in the coming two years. Further, the automotive market is another key driver and it is estimated that the global automotive builds will grow by 2-3%. Asia will lead the rise in the growth rate and North America and Europe will see the builds increase in 2%.

The final key driver is industrial production and it is estimated that the Chinese production will be in the range of 5.5-6.5%. It is expected that the same will grow at a rate of 1.6% in the United States and in Europe it will remain moderate at about 2%. Taken together, these four drivers indicate a strong growth in coatings volume in the coming years. The market will grow substantially in terms of value and volume. Again, Asia will be the fastest growing region with a high volume and value growth.

The good growth rate of construction activity across the globe has driven good gains in the coatings market. The growth and market conditions might vary depending on different regions  of the world but it is expected that the overall coatings market and its sub segments will only grow in the coming period. The future of the industry looks bright and the main drivers of the same also look  promising.