Clariant reports strong progress in the first half of 2018

“In the first half of the year, Clariant delivered strong growth in sales, EBITDA and most notably net income”, stated CEO Hariolf Kottmann. “Our adherence to Clariant’s five pillar strategy has resulted in the steady progress we have seen over the last years. We continue to focus on innovation and sustainability for portfolio advancement, leading to further progress in growth and profitability. For 2018, I am confident that we will achieve our targets”. 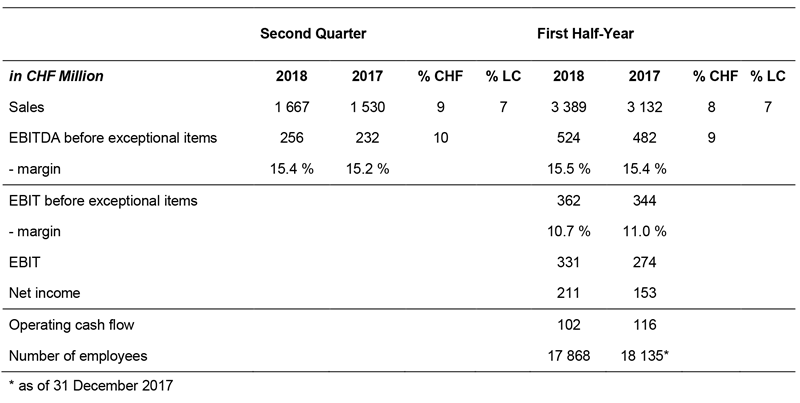 Muttenz, July 25, 2018 - Clariant, a world leader in specialty chemicals, today announced first half 2018 sales of CHF 3.389 billion compared to CHF 3.132 billion in the first half of 2017. This corresponds to 7 % growth in local currency and 8 % in Swiss francs. Sales growth was supported by organic growth contributions from all Business Areas, in particular Catalysis and Care Chemicals.

Most of the regions contributed to the good sales growth. Sales in Asia advanced by an excellent 12 % in local currency. This improvement was due to a particularly strong sales expansion in China. In Latin America, sales grew 12 % reflecting the recovery of the macroeconomic environment in this region. Sales in North America were up by 7 % and 3 % in Europe.

Sales in Natural Resources increased by 4 % in local currency due to an improving demand from the oil market. Plastics & Coatings reported 3 % local currency growth against a strong comparable base with all three Business Units adding to the development.

EBITDA before exceptional items rose by 9 % and reached CHF 524 million compared to CHF 482 million in the previous year mainly supported by the performance in Care Chemicals, Catalysis and Plastics & Coatings.

The corresponding EBITDA margin before exceptional items improved to 15.5 % primarily due to the profitability improvement in Care Chemicals.

Net income increased by 38 % in to CHF 211 million from CHF 153 million in the previous year. The higher EBITDA and significantly lower exceptional items supported this development.

Operating cash flow was CHF 102 million. This is a decrease from the CHF 116 million in the previous year. A one-off tax settlement in Germany essentially offset the significant improvement in cash flow from operating activities.

Net debt increased to CHF 1.707 billion from CHF 1.539 billion recorded at year end 2017 reflecting the usual seasonal increase seen in the first half of the year.

In the second quarter of 2018, sales rose by 7 % in local currency to CHF 1.667 billion. All Business Areas contributed to the strong organic growth, however the positive developments in Care Chemicals and Catalysis were particularly noteworthy.

Almost all geographic regions added to the growth. Sales in Asia grew by 10 % in local currency with a continuing strong development in both China and India. Sales in Latin America progressed by 13 % and in North America by 9 %. In Europe, sales advanced by a robust 5 %. Only Middle East & Africa, the smallest region, reported lower sales with a decrease of 10 %.

Sales in Care Chemicals rose by 10 % in local currency and in Catalysis by a strong 11 %. In Natural Resources, sales increased by 6 % supported by both Business Units Oil & Mining Services and Functional Minerals. Sales in Plastics & Coatings grew by 4 % supported by continued growth in all three Business Units.

Clariant expects the good economic environment in mature markets, which represent a high comparable base, to continue. Emerging markets are expected to be supportive with Latin America showing signs of a recovery.

For 2018, Clariant is confident to be able to achieve growth in local currency, as well as progression in operating cash flow, absolute EBITDA and EBITDA margin before exceptional items.

Clariant confirms its mid-term target of reaching a position in the top tier of the specialty chemicals industry. This corresponds to an EBITDA margin before exceptional items in the range of 16 % to 19 % and a return on invested capital (ROIC) above the peer group average.

First Half
In the first half of 2018, Care Chemicals sales grew by an excellent 9 % in local currency and by 11 % in Swiss francs. Both Consumer Care and Industrial Applications delivered robust growth, which was partly supported by a strong Aviation business in North America and a good development in Consumer Care.
Most regions contributed to the notable sales growth. Asia as well as North America both delivered double-digit sales growth. Latin American sales grew in high single-digits, reflecting the continuing improvement of the economic environment, as anticipated. Sales in Europe also progressed solidly despite the challenging comparison base.

The EBITDA margin before exceptional items increased to 18.4 % from 17.5 % as a result of an improved product mix and the elimination of ramp up costs.

Second Quarter
Sales in Care Chemicals rose by 10 % in local currency and by 12 % in Swiss francs in the second quarter of 2018. The good sales development was supported by growth mainly in Consumer Care but also in Industrial Applications.

Sales rose significantly in almost all regions, with double-digit growth in Asia and in North America. In Latin America, sales increased in the high single-digits while sales in Europe exceeded the high levels reported in the previous year.

The EBITDA margin before exceptional items advanced to 18.5 % from 16.6 % due to a more favorable product mix and product portfolio. The second quarter of 2018 was not impacted by ramp up costs and various maintenance shutdowns which occurred in the same time period last year.

With Genadvance™ Clariant opened the door to new innovative hair care formats for tackling damaged, dry, or thin, lifeless hair via the launch of a new generation of conditioning ingredients during the in-cosmetics Global event in Amsterdam in April 2018. Performance-wise, the Genadvance™ ingredients are proven to surpass the current compounds used in such applications as rinse-off conditioners and conditioning shampoos.

First Half
Sales in Catalysis soared by 22 % in local currency and 26 % in Swiss francs in the first half of 2018. The excellent organic sales expansion of 15 % was mainly due to Syngas and Specialty Catalyst.
Most regions added to the robust sales momentum. Growth in Asia in particular advanced strongly as a result of the excellent demand in China. In Europe, the Middle East & Africa and in Latin America the sales development also reflected continued growth.

Second Quarter
Sales in the Catalysis Business Area grew by 11 % in local currency and 16 % in Swiss francs in the second quarter of 2018. The growth was driven by a superior demand in Asia and by higher Syngas and Specialty Catalyst sales.

The EBITDA margin before exceptional items decreased to 23.7 % from 27.4 % due to a product mix effect with a proportionally higher sales growth contribution from Syngas. Last year’s figure included the one-off full consolidation step-up effect of the Süd-Chemie India Pvt Ltd. joint venture.

We anticipate solid growth in Catalysis for 2018, in line with our guidance. This is driven by Clariant’s portfolio strength, innovation capability, global footprint and partnerships as well as by the supporting underlying recovery in the Catalysis business environment.

First Half
In the first half of 2018, sales in Natural Resources increased by 4 % in local currency and by 2 % in Swiss francs supported by an improving oil environment.

The Oil & Mining Services business reported mid-single-digit sales growth in local currency, lifted by a demand improvement in the industry.

Sales growth in Functional Minerals was positive in local currency despite a strong comparable base. Excellent growth in the Foundry business outperformed the temporary softness in the edible oil business, which is subject to the quality of the respective crops as a result of the weather conditions.

The EBITDA margin before exceptional items declined to 12.6 % year-on-year, hampered by the persisting price consciousness of the oil market and a lower contribution from Functional Minerals’ Purification business compared to the previous year.

Second Quarter
In the second quarter, sales in Natural Resources increased by 6 % in local currency and 5 % in Swiss francs. This growth was supported by both the Oil & Mining Services and Functional Minerals businesses.

Sales in the Oil & Mining Services business reflected mid-single-digit growth in local currency as a result of a significantly improving demand environment in the oil market. However, Mining Services sales were temporarily negatively impacted by a customer’s facility failure which curtailed their demand.

The price consciousness of the oil market still remains unabated. The EBITDA margin before exceptional items fell to 10.0 % due in part to higher raw material costs, the time lag in implementing corresponding price increases and the unfavorable product mix in Functional Minerals. However, the Oil & Mining Services business is anticipated to build up momentum in the course of 2018, while Functional Minerals is expected to continue growing on a full year basis.

First Half
The Plastics & Coatings Business Area increased sales by 3 % in local currency and by 5 % in Swiss francs in the first half of 2018.

All three Business Units supported the sales growth. Growth in Masterbatches and Pigments was underpinned by the continued expansion in Greater China while sales growth in Additives was mainly driven by strong growth in North America, China and Europe.

The EBITDA before exceptional items rose by 7 % to CHF 236 million. This positive development was attributable to both increased volumes as well as pricing measures.

Second Quarter
Second quarter sales in the Plastics & Coatings Business Area advanced by 4 % in local currency and 7 % in Swiss francs.

Sales grew in all three Business Units. Flame Retardants in Additives and Masterbatches contributed in particular to the growth in the second quarter. The sales development in Pigments was mainly supported by price increases. From a regional perspective, sales growth was most pronounced in Greater China and North America.

In the second quarter, the EBITDA before exceptional items rose by 10 % to CHF 122 million despite a strong comparable base.

In June 2018, Clariant turned its Chinaplas 2018 spotlight on innovative additives such as halogen-free flame retardants and no-VOC masterbatches to support the Chinese automotive industry’s response to progressive new vehicle standards and reducing vehicle emissions. Clariant sees rising regional interest in its smart masterbatches and additives which is influenced by government initiatives such as “Replace Steel with New Materials”, as well as the growing demand for lighter weight and smarter vehicles and specially-tailored components for China’s significant focus on electro-mobility.