End use industries to lead growth of Indian chemical industry

Rising demand for specialty chemicals and petrochemical intermediates by end use industries such as automotive, consumer and electronics goods, packaging and infrastructure is expected to drive growth of the Indian chemical industry. The industry is expected to grow at around 9% per annum over the next five years to touch US$304 billion by FY2025. In FY2018, the industry is estimated at US$163 billion and expected to touch US$214 billion by FY2019, according to a report by FICCI in association with Tata Strategic Management Group (TSMG).

"Indian chemical sector has a potential to cross US$300 billion market by 2025 and promises strong growth across the value-chain. The industry is critical part of Indian economy has the huge potential for growth," said Mr. Deepak C Mehta, Chairman-FICCI National Chemical Committee, and CMD, Deepak Nitrite Ltd.

"The growth is expected to be driven by rising demand in end-use segments for specialty chemicals and for petrochemical intermediates," added Mr. Vinay Mathur, Deputy Secretary General, FICCI.

Currently, India's per capita usage of specialty chemicals is relatively low as compared to the developed nations. Hence provides a significant growth potential together with the rising middle-class income households that would support strong demand for specialty chemicals in the automotive, personal products, water treatment and constructions segment.

Among the specialty chemicals, construction segment is looked as most promising, according to a KPMG report titled 'Bright future for Indian chemical industry'. The Indian construction chemicals includes a wide range of products from admixtures to sealants. Admixtures make a chunk of the segment with 42%, while adhesives and sealants form a 18%. The report highlights that the specialty sales are expected to touch US$90 billion by 2023.

Moreover, a strong demand for specialty chemicals would lead to an impact on the petrochemical intermediates that forms a key input material to the downstream specialty chemicals.  Currently, India is deficit of majority of petrochemical intermediates and largely depend upon imports. However, of late there has been a shift with surplus of Ethylene capacities, Ethylene derivatives and other products such as Methanol,  Styrene  and  PVC. This has improved the export scenario of the industry and also led to less dependence on imports. Today, India has become a net exporter of Ethylene, and exports of Benzene and Paraxylene  has  also  substantially increased over the  last  year.  Overall, production  of  petrochemicals  have  marginally  increased  by  1.1%  over  last  year  and chemicals have grown by 8%.

The petrochemical market in India is estimated to grow at a CAGR of 10% over the next 5 years to reach US$100 billion by 2022, predominately derived from import substitution. Each year, India imports  over US$13 billion worth  of  petrochemicals,  mainly  for  the  want  of feedstocks, according to FICCI report. With better supply chain solutions and technology, there exists an opportunity to manufacture petrochemical intermediates in India. To realise the opportunities in the segment, the Indian companies have begun exploring alternatives like coal gasification, syngas and pet coke, and undertaking aggressive expansion plans to change the competitive landscape.

However, the challenge for Indian players would be to get right technology partner to develop home grown solutions. The recent acquisition by United Phosphorous Ltd., largest  agrochemical  company  in  the country, of Arysta Lifescience for about US$4.2 billion is a testimony of the industry opening up for investments globally.

The chemical industry is critical part of the Indian economy, and key to the industrial and  agricultural development of the country. It comprises of small and large scale units, and has been attracting significant investments from both Indian and overseas companies over the past few years. In FY18, Indian chemical industry (other than fertilisers) attracted foreign direct investment (FDI) investment of US$1.3 billion, which is about 3% of the total FDI inflow. 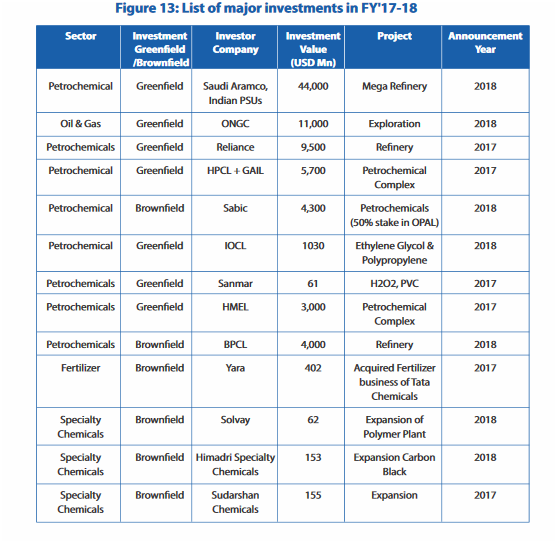 In the petrochemicals, Polymer continues to lead the segment with sustainable growth momentum at a 10% CAGR for the next five years. According to reports, the growth would be driven by demand from packaging, construction and automotive sectors. Currently, the per capita consumption of polymers in India is only 5.2 kilograms (kgs) as against China that consumes six times more of the number, according to a KPMG report.

Meanwhile, Polyester is another potential segment in the petrochemicals sector. Polyester is expected to account for bulk of the incremental fibre demand globally. In India, per capita fibre demand is below global average, offering significant head room for growth, indicates KPMG report.  India's polyester demand is expected to  increase by 10% CAGR over the next five years.

India's proximity to strong growth markets, conducive business environment, government reforms, and development of the petroleum, chemicals and petrochemical investment regions (PCPIRs) are some of the key drivers for the Indian chemical industry. The four designated PCPIRs in Andhra Pradesh, Gujarat,  Odisha and Tamil Nadu by the government are aimed to reduce overall capital expenditure of chemical companies by building common infrastructure of utilities, pipelines and Effluent Treatment Plants (ETPs), and strategically located at ports for easier access to both domestic and global markets. "The idea is to support and develop downstream industries through these dedicated regions," said renowned industry experts.

The government's reforms and initiatives such as 'Make in India' initiative has been providing significant thrust to the industry, boosting investments, infrastructure and innovations. The efforts of the government has led to a remarkable and historic achievement with India's ranking on the World Bank’s Ease of Doing Business (EoDB) Index moving up 30 places to be part of the top 100 countries. "In fact, India is the first large country ever to record such an increase in ratings over a single year," according to a report by KPMG.

The proposed anti-dumping duty on a Chinese chemical used in dye and photography industry for five years is expected to further safeguard the Indian chemical industry, which has been faced with continued dumping of the chemical - Meta Phenylene Diamine - in the market. In 2013, Indian government had imposed duty of US$0.78 per kg on the imports of the chemical for five years and the industry is demanding continuation of the anti-dumping duties on Chinese imports.

Today, India ranks 3rd as the largest consumer of polymers and largest producer of agrochemicals. It is the 6th largest chemical market in the world in terms of the output after US, China, Germany, Japan and Korea. The industry produces more than 80,000 commercial products, serving large number of end use application industries. Global chemical industry estimated at US$4.7 trillion in 2017 driven by demand from end-use industries and India contributes 3.4% of it. India ranks 14th in exports and 8th in imports of chemicals (excluding pharmaceutical products) globally and its net imports have grown at 5.8% between 2014 and 2018 in volumes.