The Indian pharmaceutical Industry is the third largest in the World, in terms of volume and thirteenth largest in terms of value. The industry enjoys an important position in the global pharmaceutical market. With a large number of scientists and engineers, about 80% of the antiretroviral drugs used to combat AIDS, are supplied by Indian firms across the World.

India’s biotechnology industry is consistently growing and is expected to have a growth rate of 30% a year. The market is expected to grow at $55 billion by 2020.

The future prospects of the industry seem bright in terms of value and volume. With a high rate of exports and a monopoly in terms of various drugs, the Indian pharmaceutical firms have a bright future. With rapid urbanization and increasing awareness of healthcare, the industry is expected to grow in the coming years and will reach new heights.

The ‘Buy American’ move by Trump could affect the Indian Pharmaceutical Industry.

In 2015, India had exported about $6 billion worth of drugs to the US. Any restrictions to the imports would have a huge impact on the Indian industry. Some of the biggest pharma companies have been put under the import alert by the US Food & Drug Administration (USFDA). In 2013, Ranbaxy had to pay a fine of $500 million for a wrongdoing in its manufacturing process, and since then many companies have become a target for global competitors to beat the industry for the quality of drugs.

The Indian pharmaceutical industry is expected to grow over 15% per annum by 2020.

Apart from Trump’s policy, the biggest controversy the Indian Pharmaceutical Industry faced was the substandard drugs manufactured by companies. In 2016, the media reported many instances where substandard drugs were detected in India, Vietnam and Mozambique. Although, the regulators in the US, EU and WHO have already been red flagging the quality of the Indian drugs for a long time now.

The major players blamed the storage conditions and the hot and humid climate across the Country for this. The players mentioned that after the drugs left the premises of the manufacturer, they were not stored properly, which had an impact on its quality.

It was also said that the companies sell substandard drugs to Indians and these companies includes GSK India, Sun Pharma, Cipla and Abbott India.

Four companies in India account for 20% of the total market share. These include Dr. Reddy, Lupin, Cipla, Aurobindo and Cadila.

All these companies spend a significant amount on their R&D spending and the highest expenditure was incurred by Sun Pharma, followed by Dr. Reddy. Cost efficiency and competency continue to be India’s forte, India’s cost of production is much lower than that of the US and Europe.

In addition, India has a skilled workforce and a high technical competence, which gives it an edge over other companies. The various raw materials used in the Pharmaceutical industry include animal extract, drug intermediate, herbal raw material and pharmaceutical additives.

India has been consistently working on the manufacture of raw materials within the Country so as to reduce imports and the dependence on Chinese companies for the same. This helped strengthen the bulk raw material drug industry in the Country.

The impact of GST on the Indian Pharmaceutical Industry will be neutral. The average rate of VAT for most products is about 5% and for the formulations, it was 9%. The excise duty charged was 12.5%.

The Government has also provided relief to various pharmaceutical companies, with the introduction of excise manufacturing zones. Most of the drugs that used to be charged at 4% VAT will now be charged with a 5% GST. Nicotine gums, which are used by Cipla, will be charged at 18%, hence there will be a significant impact on the firm.
Under GST, Ayurvedic medicines will get costlier, they were charged at 4% VAT and a 1.5% excise earlier, and it is now replaced with 12% GST.

The GST rates on various products are mentioned below: 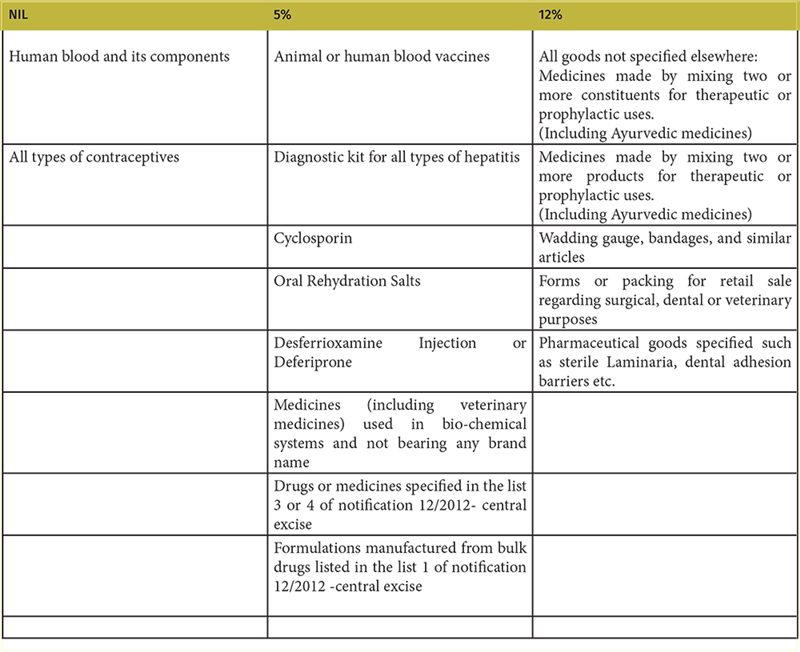