Reverse osmosis (RO) is one way of safely removing critical trace substances from wastewater or drinking water [1]. However, when RO filtration is carried out, biofouling and organic fouling in the spiral wound elements represent a hurdle. Even after ultrafiltration has acted as a barrier, bacteria can settle in the permeate. This is not necessarily due to the integrity of the UF module, but to the fact that the system is not hermetically sealed. Bacteria can thus enter the tank via the air and then often multiply exponentially there, since the organic substances present in the wastewater reach the UF permeate and serve as nutrients there.

The object of the investigations of a BMBF research project is to identify possibilities for reducing fouling and thus stabilizing the RO process as a whole.

The comparison and evaluation of treatment concepts for treated wastewater for use in the industrial and agricultural sectors is the aim of a project funded by the Federal Ministry of Education and Research (Bundesministerium für Bildung und Forschung – BMBF) named MULTI-ReUse (www.water-multi-reuse.org). The investigations will be carried out in a network of nine research facilities, manufacturers, and users in total at a pilot plant at the wastewater treatment plant in Nordenham, Lower Saxony. Conventionally treated wastewater is fed into the pilot plant and treated further. The aim is to produce service water that can be used in the industrial sector instead of drinking water. In flexible treatment chains, ultrafiltration (UF), reverse osmosis (RO), activated carbon filtration, and UV disinfection processes are combined to produce defined water qualities.

Reduction of biofouling by feed spacer

The most practical way to reduce biofouling is to prevent the growth of bacteria in the spiral wound element by minimizing spaces with slow cross-flow velocity. For this purpose, a new feed spacer was tested in direct comparison with a standard spacer. The feed spacer is a crucial component of spiral wound elements, as it influences both the height of the feed channel and the flow. 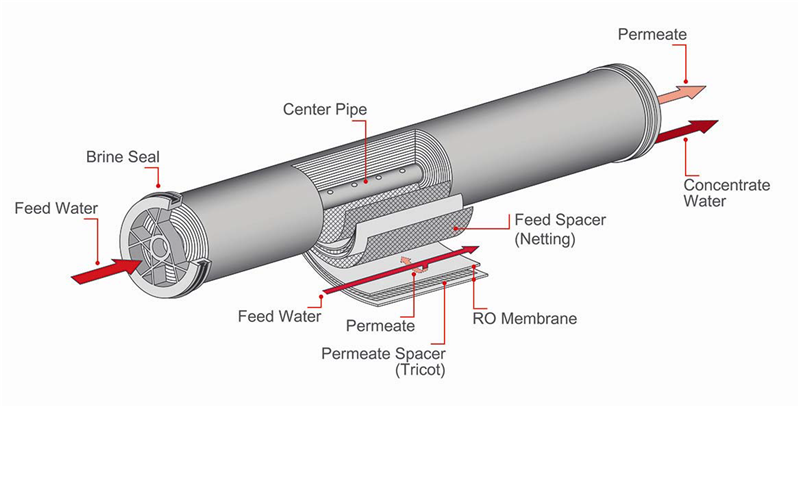 Compared to the standard spacer, the new feed spacer has different thread filament heights. Thick and thin filaments alternate. Thus, the feed-channel height can be defined, and at the same time, sufficiently strong turbulences can be generated with thinner filaments in order to reduce the concentration polarization on the membrane surface. Simulations show that this leads to fewer areas with less overflow. 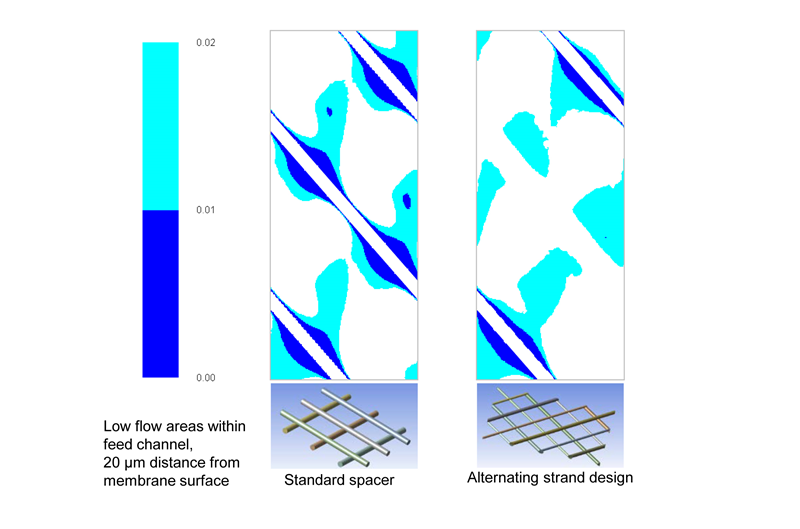 Investigations at Delft University of Technology confirm that this has an influence on biofouling. Test cells were equipped with different spacers and flowed over. Bacteria were prepared in the tank, and their growth was promoted [2]. The test showed that the pressure loss along the feed spacer increased continuously. After 90 days, the standard spacer’s pressure loss due to biological blockage had increased by 54%, while the standard spacer’s pressure loss due to biological blockage had only increased by 30% with alternating-filament spacers (ASD, alternating-strand design). If one considers that a system is cleaned when the pressure increase has reached approx. 15%, the standard spacer had to be cleaned after approx. 45 days, and the ASD spacer only after 65 days. This, of course, has an influence on chemical consumption and downtimes. In order to validate this result under real test conditions, two four-inch pressure pipes were equipped with RO elements in parallel as part of the project, in which a standard spacer or the ASD spacer were installed.

The pilot unit in Nordenham consists of two separate lines in order to allow the comparison of different process conditions. Following the biological stage, the wastewater is pretreated by precipitation or flocculation followed by ultrafiltration (UF). Whereas the function of UF is to remove particles, the removal of salts and micropollutants is performed by reverse osmosis. Another objective was to implement a stable and energy-efficient process. Each RO line has a four-inch pressure pipe with three installed elements. The element type Lewabrane® B085 ULP 4040 (ULP = ultralow pressure) is installed in the pressure pipe RO1, and a special Lewabrane® B085 ULP 4040 with ASD is installed in the pressure pipe RO2.

During almost 200 days of testing, the elements were exposed to different temperatures and water qualities. During the period indicated (Image 4), cleaning was carried out on days 83 and 147 on both lines. The line equipped with ASD elements showed a lower pressure drop throughout the test phase. 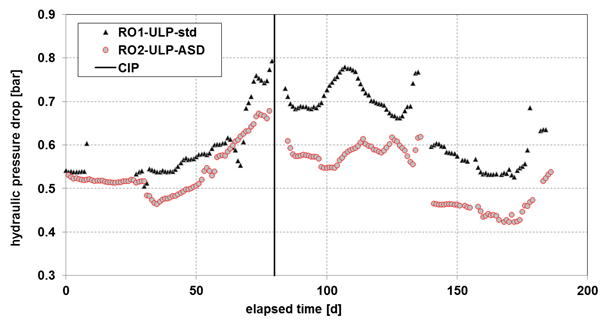 At the end of the test phase, the elements were removed and opened to determine the type and strength of the fouling. Here it became clear that the fouling in the elements with the ASD spacer was significantly lower than with the standard spacer, which can be seen on the right in Image 5. 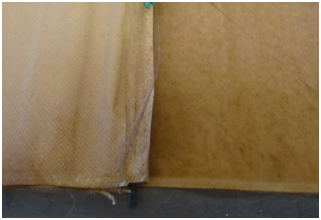 Image 5: Comparison of membrane surface of the ASD element (left) and with standard spacer (right)

In addition, the extent of fouling was determined. It was found that the ASD element had 40% less fouling. The incineration of the fouling showed that the majority of the fouling with an ash content of 20–30% was organic. The investigation mainly concerned the first element in the pressure pipe. In the first element, the organic fouling was much stronger than in the inorganic one. The inorganic fouling was mainly visible in the last element, where the salt concentration was significantly higher and precipitation occurred. These inorganic precipitates could not be prevented by a spacer.

Reverse osmosis is a safe technology used to remove pollutants from water. Energy and chemical requirements represent hurdles for a wide range of applications in waterworks. Although energy requirements have been significantly reduced in recent years through improved membranes, and the use of biocides and cleaning chemicals could be significantly reduced, there has not yet been a breakthrough. Although LANXESS is working on a further research project to improve the spacer by surface modification, it is likely that only an overall concept with different technologies, such as adsorber resins, will ultimately prevail in order to better control organic fouling on the membrane.