The Bright Future of Petrochemical Industry in India

India’s growth story will remain incomplete without the mention of petrochemicals which play a significant role in the economy. With the growth in the industry and new joint ventures taking place, the industry is set to take the global demand in its stride.

Petrochemical industry is the backbone to some of the crucial industries which include agriculture, healthcare, textiles, and infrastructure and consumer durables.

India is the sixth largest manufacturing industry in the world and it has grown fasted in 2015-16 than earlier. Petrochemical has its own story to tell in the growth story of the Indian economy. The petrochemical industry contributes about 30 percent of raw material to the chemical industry which is expected to reach $250 billion by 2020. The petrochemical industry itself is expected to reach $100 billion by 2020 at a CAGR of 14%. The main focus of the industry is to plan capacity addition and meet the domestic as well as export demand. When the three major public sector oil companies, Bharat Petroleum Corp Ltd, Hindustan Petroleum Corp. Ltd and Indian Oil Corp Ltd joined hands in June, it led to one of the world’s largest integrated refinery complex in Maharashtra. The refinery complex will be built at a cost of $40 billion and will be commissioned by 2022. It is designed to produce Euro-VI and above grade fuels for transportation and will have an in built flexibility for processing heavy crude oil with blending techniques. The government has also finalised a 55 million tonne refinery expansion at the existing refineries and a new unit planned at Barmer, Rajasthan. 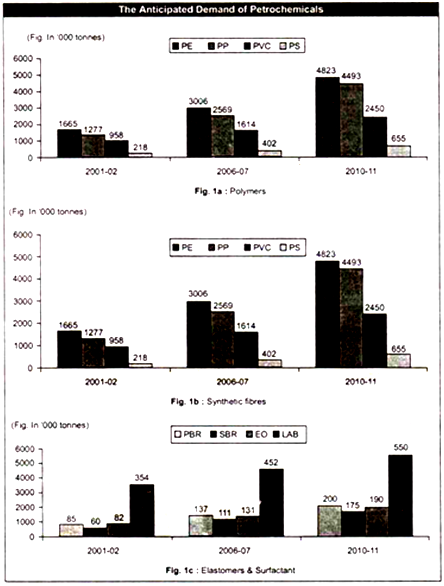 The major players in the industry are the central government undertakings which include Gas Authority of India (GAIL), Indian Oil and Indian Petrochemical. Along with the three companies, private players like Reliance and Oswal Agro also invested a huge sum into the development of the industry. There are total nine petrochemical plants which are currently operative. Four are located in Gujarat and three in Maharashtra. One is in UP and one is in West Bengal. Gujarat is a significant state for the growth of the industry and is constantly catering to the domestic demands. 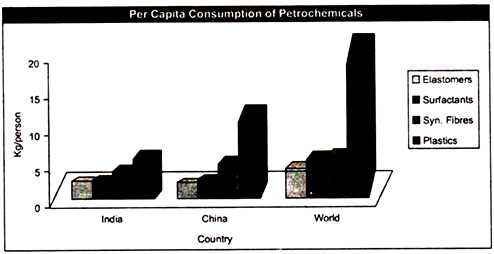 The petrochemical industry is highly capital and technology intensive. It requires an initial investment of Rs.50.000 crore or more. Indian government had declared various tariff and duty exemptions to give incentives for the expansion of the industry as a whole. Indian government is also eager to attract the foreign direct investment in the sector and has relaxed some of the licensing policies to achieve the same. Some of the proposed projects by the government are shown below: 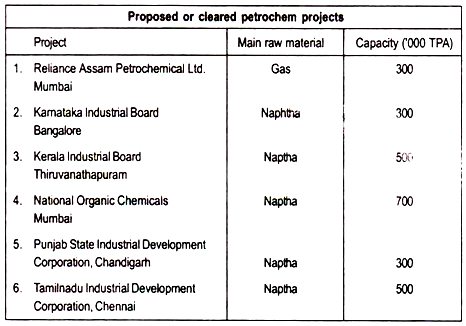 Courtesy: Yourarticlelibrary
With the increasing purchasing power, the demand for petrochemical is on the roll. The products cover all the essential daily use items ranging from housing, clothing, construction, automobiles, horticulture, furniture, household items, packaging, medical appliances and much more. This has given polymers the much needed push in the country. The per capita consumption of polymer has reached the saturation level in US whereas India is expected to maintain a high economic growth propelling the country’s polymer consumption. India could turn into a net exporter of polyethylene in 2017 as the country will welcome new capacities in Gujarat. With it, India could target China, Africa, Turkey and Southeast Asia as the possible export markets in the country’s domestic PE capacity will increase by 2.01m tonnes by mid-year.

India has always imported polymer until 2016, but by the second half of 2017, India’s PE capacity outpaced the domestic demand. There has always been a major demand from industries like construction, packaging and automobiles. This trend is expected to continue with a higher vigour. There are endless opportunities for the petrochemical industry in the coming years. In order to make the most of this growth, various companies are making investments to boost their petrochemical activities. Others are working towards capacity expansions to fill the gap between the demand and supply within the country. However, there are areas where the industry faces various challenges:

Improvement in Infrastructure: One of the major setbacks for foreign investment is the state of infrastructure in the country. Various projects are in the pipeline to attract foreign companies to establish industries in India. Government has set a target of constructing 15,000 km highways in the next financial year in order to help capacity expansion and ease industrial logistics in the country.

Foreign Investment: The growth of the Indian economy has enticed the foreign investors to make India their investment destination with new expectations. Overseas investment in India is expected to surge to a record number in the coming year.

Gearing up for growth: In order to make the investment easy, the government is looking into projects that help expand the industry. It plans to induce the skilled workforce into the industry in order to handle the growth of more than 100 Central Institute of Plastic Engineering and Technology. Currently, there are only 23 institutes in the country.

Capacity expansion: In order to make the most of the growth story, companies are gearing up their capabilities with plans of expansion and technology transfers.

Challenges can be turned into an opportunity with the use of technology and skilled manpower. The pace at which the industry is growing, the only way to ascertain its presence in the global market, is by grabbing every opportunity to make it a strong stepping stone to growth.