The Way Forward for the Plastic Industry

Plastic is an important raw material for every economy across the globe. The popularity of plastics has ensured that the industry keeps growing consistently for five decades with a production has rose from 15 million metric tons in 1964 to 311 million metric tons in 2014. With these numbers, the industry could reach to more than 600 million metric tons in the next two decades. Nevertheless, functional benefits do not come for free. The plastic packaging, which is the quintessential single use product, represents a quarter of the total volume of plastics and 95 percent of the total value of plastic packaging material is lost to the economy. Although the intended useful life of the same is less than a year, it lives on for many years to come.

The global economic growth of the industry is linked to petrochemical consumption where plastic is very important. The processing of plastic is a pillar of the economy across most advanced countries. The per capita consumption of the world is 28 kgs while India is at 11 kg and China at 38 kg. Brazil is at 32 kgs and countries like Spain, Italy, UK, Germany, USA, Japan, Korea, Taiwan and Australia are at more than a 100 kg. This means that India has a huge potential to grow and its per capita consumption is one of the lowest in Asia.

The per capital consumption of virgin plastic in India is 11 kg and recycled plastic is 3.8 kg. Its virgin polymer consumption in a year is 15 MMT and the country has 113,000 processing machines. The processing capacity is 30 MMT and there are more than 200 plastics machinery manufacturing units in the country. There is an estimated investment requirement of 10 billion US $ in the next five years. 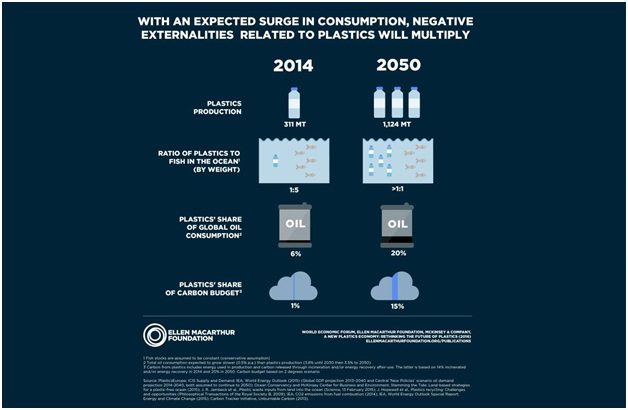 India competing globally
The plastics industry in the country is well developed with leading technology and involvement of high tech entrepreneurs including the plastic processors which has made a significant impact on the world. India also has huge growth in terms of exports. The country uses state of the art technology in its manufacturing process and ensures that the exports keep growing. India has a huge demand of polymers and also exports the same. The manufacturing capacity is constantly augmented to meet the world demands. India’s polymer demand is expected to reach 24 MMT by 2022 with major players holding a significant stake in the industry. These include Reliance, ONGC, OPAL, IOCL, GAIL, Haldia, Shriram, DCW, Mittal, Finolex and Bharat Petroleum. 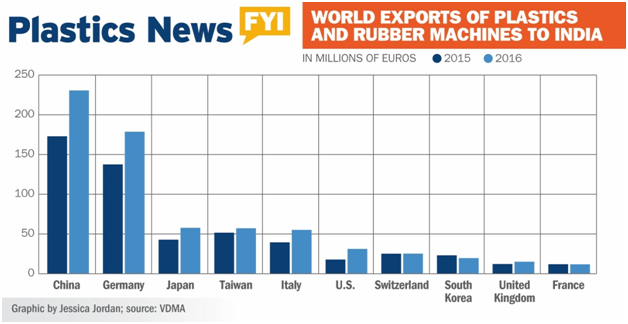 What makes Indian petrochemicals strong?
The future
India has a strong opportunity to grow in terms of its plastic manufacturing capacity. The productivity growth above 8% will help the country sustain. Further, the per capita GDP will be more than current levels and Indians are going to purchase 5 times more cars. There will be an entry of more than 100 million people in the labour force. The investment in infrastructure will meet the global standards, it is expected that the per capita consumption will reach 20 kgs by 2020. The exports are expected to grow at 8% and the demand of the country is also expected to increase. Overall, India can easily meet the export demands with an increase in production and with the adoption of the latest technology. India is expected to enjoy the fastest growth in the polymer demand in the world over the next five years. The industry will outstrip China and other emerging economies. There is massive investment in the region’s petrochemical and polymer production industries which drive strong growth in the polymer demand. The fundamentals of the economy are robust under liberal foreign investment policies of the government, hence there are huge opportunities for the industry to attract foreign investment and grow. The packaging industry is also poised for strong growth and has a diversified consumer base. New innovations in the packaging industry are driving growth in the country which is supported by the domestic capacities and the adoption of new technology. India’s growth story will remain incomplete without the mention of the plastics industry which serves millions of industries across the globe. Although the industry is developing, it has been meeting the export demand from a number of countries. The industry will remain dominated by the major players in the coming years but there will be increased investment and infrastructure for the growth of the industry.